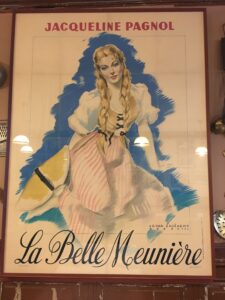 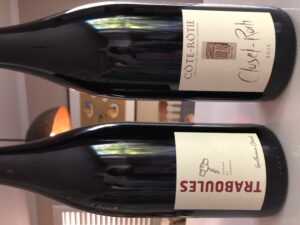 My jet lag probably crept back after lunch, or else the excitement of visiting Lyon and Ampuis for the first time had me distracted, because I’d more or less forgotten about Traboules by the time I made my way to the Gare de Lyon to catch the train the following day. But the idea must have lodged in my brain like a little time bomb: a year and a half later, when I finally tasted the wine my Clusel-Roch importer friend Charles Neal describes as “an alternative gamay to Beaujolais,” it kind of blew my mind.

As for Lyon’s distinct architectural features, they sound historic, mysterious, and entirely worth the extra effort to explore. “There may be as many as 400 traboules in town,” according to the travel and food website, Atlas Obscura. “[U]nfortunately only a small percentage of them are open to the public, mostly located … in the historic Vieux-Lyon and the Pentes de la Croix-Rousse areas.”

Discreetly marked and popular with intrepid tourists, the traboules seem to be as much a part of Lyon’s fabric as its bouchons, the traditional Lyonnais bistros. “[T]he secret alleyways and staircases once provided safe and efficient passage for silk workers to get their wares to and from market unmarred,” the website informs readers. “Now partially open to the public, many of the traboules worm through several buildings forming a secret continuous covered passageway.”

After further digging, I found a French website actually called LyonTraboules. On the home page, it echoes Atlas Obscura’s information that “traboules are frequent in old Lyon, but many are hardly visible or closed to the public.”

To me, the semi-hidden nature of these passageways is an apt metaphor for Traboules, the hard-to-find wine. Unlike Georges Duboeuf’s supermarket Beaujolais, or even the fantastic cru versions that many smaller retailers stock, I’d practically needed a gamay divining rod to track down this elusive Clusel-Roch bottling. I started to wonder if that shared traboules/Traboules scarcity was what inspired the name. Guillaume Clusel soon had it cleared up for me.

The Clusel family began making gamay from the Coteaux du Lyonnais appellation in 2010. In this region just west of Lyon, only gamay noir is permitted for the red wines. The same goes for Beaujolais to the north, but on an exponentially larger scale. When Charles Neal put me in touch with Guillaume, the couple’s son who has taken over much of the winemaking responsibility, I was able to hear the full story. 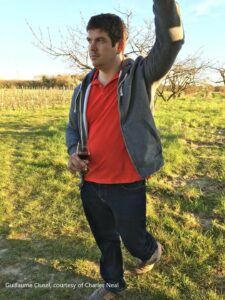 “The link is very simple,” he wrote to me in an email in March, after I’d asked him to explain the label’s origin. “I wanted to have a Lyonnais name for this wine, because it shows all the Lyonnais delicacies and will go very well with our mâchons. The Coteaux du Lyonnais is the most lyonnaise of appellations!”

Mâchons? I scratched my head.

“The mâchon is a Lyon gastronomic tradition served in the morning by traditional restaurants of Lyon. It is usually composed of cochonnaille, or tripe, and washed down with bottles of Beaujolais or Mâconnais. The word mâchon is derived from the verb to chew. Mâchon is an element of Lyon’s gastronomic heritage. A fraternity, the Francs-Mâchons, contributes to its development and its notoriety.”

I was never in a fraternity, but one organized around tripe breakfasts in Lyon accompanied by local wines sounded like a confrérie of fellows I’d happily join, given the opportunity. The quick stop I made in Lyon back in 2018 was probably the closest I would get. 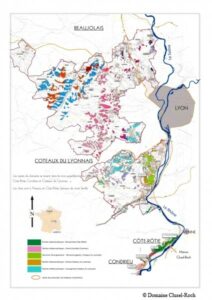 Earlier this year, The Rare Wine Company in Brisbane, just south of San Francisco, sent out an offer to their customers and online subscribers. The veteran importer-retailers, who are particularly passionate about Côte-Rôtie, profiled a few of their favorite growers in the offering of current and library release wines. In its introduction, they quote the British wine writer and Rhône expert, John Livingstone-Learmonth, who has described Côte-Rôtie as “the bridge between Burgundy and the Rhône.”

When I read the offer, it prompted another thought about the name of the Clusels’ Coteaux du Lyonnais wine: maybe in the big picture, Traboules works as a bridge or, better yet, a passage, from gamay to syrah. On a wine map, it represents a route from Beaujolais to the Rhône—a road that, like the traboules, winds symbolically through Lyon, the city that divides the two important regions.

For Guillaume Clusel, the borders on that map might be blurred. “To me,” the young winemaker replied in his email when I asked him if syrah and gamay could resemble each other, “the similarity could be the aging potential. Côte-Rôtie is undoubtedly a great wine to keep, but gamay on great terroirs can be, too. My wines meant for aging, the gamay and syrah, are worked in the same way.”

To a gamay lover and a syrah addict, the thought of these two grape varieties being turned into wine under one roof by the same capable Clusel hands is an intriguing one. I had to wonder if the winemaking crossed over in any way. So, it seems, did Charles Neal.

On our call earlier this year, he mentioned that, from the initial Traboules bottlings at Clusel-Roch, “sometimes the wines were very spicy and almost tasted like you could tell it was a Côte-Rôtie producer that was making it. So, it made you question, ‘Hmm, I wonder, like, if indigenous yeasts in the winery are kind of floating around and somehow give off a little bit of that character or something?’” 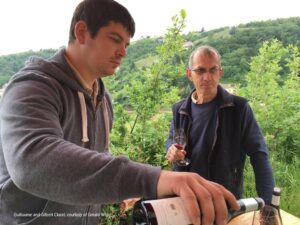 If you zoom out quite a bit, the distance from Ampuis to the Route des Coteaux du Lyonnais is about the same as the miles between the Russian River and Napa Valleys. Ambient yeasts aside, it’s easier to picture a Calistoga or St. Helena winery trucking a few tons of zinfandel over the hills from Santa Rosa to crush in a cabernet facility than it is to grasp what the Clusel family has been doing for a decade: producing a small amount of delicious gamay at the epicenter of French syrah.

These days, though it’s still an elusive wine, Traboules has a separate identity from the Clusels’ St. Joseph and Côte-Rôtie. While he noted the similarities between the Clusel-Roch wines, Guillaume seems pleased to work with gamay as its own thing. At the end of his email, he wrote, “I simply appreciate this variety very much, because you can make magnificent fruit wines. But also concentrated wines, while keeping beautiful balance and with great aging potential.” 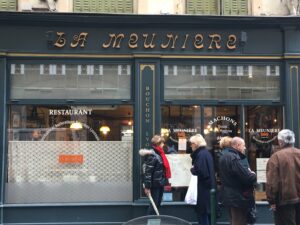 With just a free couple of hours that Friday afternoon in 2018 before catching a lift south to Ampuis for the syrah and viognier weigh-in, I opted for a bouchon visit—instead of a traboules hunt—as my inaugural Lyon activity: La Meunière, to be exact, at 11 Rue Neuve in the 1st arrondissment, where I ate a simple but memorable lunch. The place is described as “Véritable & authentique” on its website. In person, the white lettering on the glass front door advertises mâchons served daily, starting at 9:00. I assume Beaujolais, instead of jus d’orange, shows up on the morning menu.

With my delicious meal, I drank a glass each of some local vintner’s viognier (the garçon looked at me sideways when I asked if the 8-euro serving was Condrieu) and someone else’s fruity gamay. For all I knew, the red they poured me was a Coteaux du Lyonnais. I remember that it tasted like good Beaujolais and, being on vacation, I’m pretty sure I had a second glass. 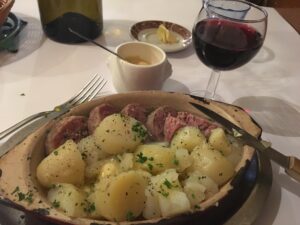 Two women sitting at the table next to me finished up just before I did. “Bon,” one of them said to her friend, scooting her chair back. “On a bien mangé.” We ate well. And we did.

In the meantime, the traboules of Lyon have been around since the 4th century and, though these are precarious times everywhere you look, probably aren’t going anywhere. “On LyonTraboules,” the website reminds me, neatly converting its historic subject into a verb, “you will find everything you need to trabouler, and above all to discover another older Lyon close to the city center.”

So, I’ll save the traboules for a post-mâchons trek on my next visit.

I can trace this gamay tale two and half years back to Paris, but it began for me in earnest last fall when I finally got my hands on some Traboules, courtesy of my friend Dan Polsby at Vintage Berkeley in Elmwood. At that point, of course, no one had any idea that six months later we would start slogging through the odd pandemic days in which we still find ourselves, with no definite end in sight.

Knowing that my well-spoken friend was as much of a fan of this unique Rhône Valley wine as I was, I asked him to email me some comments on it for this column. The request coincided with the beginning in March of California’s coronavirus lockdown, and the onset of everyone’s new normal. It got an understandable pass from him.

Dan did offer up something in his email, and I laughed reading it: he and some faraway French contributor to the LyonTraboules website were on the same wavelength when it came to verbing the Coteaux du Lyonnais wine and the lyonnais thing that gave it its name. “I’m not sure I have much mental bandwidth right now to Traboulify,” he wrote, “other than to say I really, really like it, and I hope it has curative properties, because we’re all about to need some.” 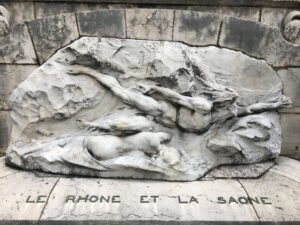