IF THIS HAD BEEN AN ARTICLE about, say, San Francisco bartenders in the 1970s and 80s, chances are pretty good that a couple of Irishmen would have made an appearance by now. But two Scottish winemakers in the same story on Sonoma County syrah? Not bloody likely, you might think. Yet it happens, anyway: Steve Law, who was mentored by zinfandel specialist Michael Talty and inspired by a pair of Rhône vignerons, found another 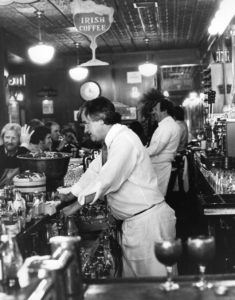 important career influencer when he introduced himself to Edinburgh native Andy Smith, the winemaker and proprietor of DuMol Winery in Windsor.

“I met Andy in ’08 down on the Central Coast at one of the Hospices du Rhone events,” Steve told me last year. “I was initially drawn to him because of his accent. It was like, ‘Who the hell are you?’ I found out he was actually the winemaker at DuMol, and the friendship has grown between the two of us.” He described Smith, 48, as a brilliant advisor, especially when it comes to analyzing different microclimates of Sonoma County for their syrah potential.

Andy Smith has made wine at his Windsor facility since 1999 and started producing DuMol’s Russian River Valley syrah a year later. I called him there recently to chat about the MacLaren wines. He echoed his friend’s comments about his own winemaking mindset, telling me that Steve “knows what he likes, and that’s his target. That’s his vision.”