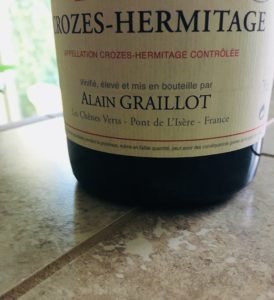 TASTING IN OAKVILLE at Miner Family Winery back in July, it was my French wine importer friend Jack Edward’s comparison of Miner’s 2011 La Diligence marsanne to the Rhône Valley that triggered a flashback to some of the marsanne-based wines I’d tried in the past, especially from the Crozes Hermitage and Saint-Joseph appellations and, when I was lucky enough, from Hermitage. Though they aren’t as widely available in California or the rest of the U.S. as their red counterparts, northern Rhône white wines from producers like Alain Graillot (Crozes-Hermitage) and Domaine Faury (Saint-Joseph) epitomize the particular charms of marsanne-roussanne blends, while the great Jean-Louis Chave’s description-defying Hermitage blanc exists in another universe altogether. Unlike white Hermitage these days, the price of which would inflict feelings of inadequacy on even the most aggressive Napa Valley business manager, Graillot’s and Faury’s bottlings represent some of France’s great white wine values, as do those of their equally accomplished fellow producers. 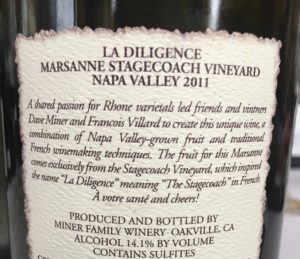 I remember a couple of road trips to Napa and Sonoma while in college in the late 80s. The white wines on offer in winery tasting rooms (free of charge, no ID checks, lots of pretzels and local mustard) were as much about the two “blancs”—chenin and fumé—as they were about chardonnay. But before I began to develop a sense of what California white wine was supposed to taste like, I was serving and drinking blancs from Saint-Joseph and Crozes-Hermitage (and even Chave’s Hermitage) in Paris in 1991 and ’92, working as a garçon and barman at the iconic first arrondissment restaurant, Willi’s Wine Bar. It was a formative period in my wine career. As much as anything else I recall drinking back then, the distinctive aromas and flavors of northern Rhône white wines etched an indelible impression on my rookie palate. When, years later, I tasted the ’11 La Diligence marsanne at a San Francisco trade show, I experienced a rush of memory to that time.