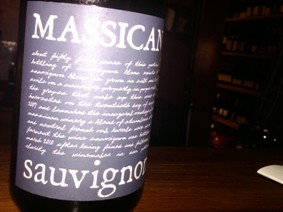 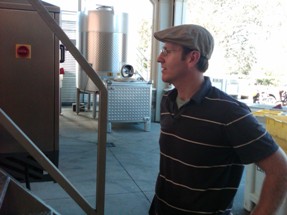 On a cool, damp July morning several weeks after the birthday party, Dan and I drove over to Pope Valley to visit the vineyard. With his dog, Sophie, sprawled on the back seat, he shared some background information on Massican and described the influence Italy had had on his winemaking career. The wines from the historic dell’Acate estate, as well as those of Friuli in Italy’s northeast corner, helped animate his side project. “My influence has always been Italian wines, red and white,” he told me as we ascended the hills east of St. Helena. “I’m inspired to drink those wines, so I’m inspired to make them in Napa County.” Massican’s small production was in fact planned around blends of the white varieties tocai friulano and ribolla gialla, grapes responsible for some of Friuli’s most interesting white wines. I asked Dan how sauvignon blanc figured into the program. “Thinking about white winemaking and getting tocai or ribolla, I was considering some of the other great white wines coming out of Friuli. There’s a lot of wonderful sauvignon blanc there.” He credited the variety’s success to the limestone soils in the Dolomites and Alps regions of northeast Italy but was careful to note, “Although we don’t have the limestone characteristic here in Napa or Sonoma, the goal was to find some sauvignon blanc.” 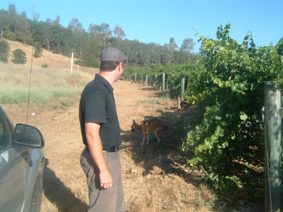 At Larkmead, Dan and his Scottish boss, Andy Smith, produce an elegant sauvignon blanc that contributes to Napa Valley’s definition of the grape: rich and broad in texture, with fine acidity and subtle herbaceousness providing flavor detail and an unmistakably grassy aroma. “I really love the sauvignon blanc we make at Larkmead,” he said earnestly. “When I was talking to [viticulturist Kelly Maher] last year about availability of fruit in Napa, he told me he had some to sell.” Maher is a highly respected vineyard consultant who, according to Dan, has been a proponent of sauvignon blanc plantings in Pope Valley. Last spring, he accepted Maher’s offer of Pope Valley fruit to purchase for the Massican label. “Because of the valley’s hot days and cold nights,” he explained, “the wines retain their acid.” Acidity may be the key factor: as textural components, the buoyancy and bite afforded sauvignon from its naturally high acid are integral to its identity. Lesser California sauvignon blancs almost always display degrees of flatness, or even flabbiness. Tasting them, you get a sense they were made from fruit grown in the wrong place. With Dan’s young sauvignon program at Massican, the opposite is the case. He has, indeed, chosen an ideally situated vineyard. As he described it, “We came out here one day, took a look at the vines, and immediately I said, ‘let’s do it.'” He got a little excited, like a Yankees fan discussing last year’s resurrected team. “It was crazy. We created the Massican concept in June of ’09, and I was harvesting in August.”

If he channels his Italian ancestry through the Massican wines, behind the wheel, Dan is all New Yorker. “I’m not a very good driver,” he confessed at one point during the 30-minute trip. We’d just swerved at a foggy intersection on Howell Mountain Road to avoid a giant SUV. The scowling mom navigating it from several feet above the asphalt must have concluded the same. As I waved weakly at the kid in the rear seat, relieved not to have been at the wrong end of a T-boning, it occurred to me that Dan was probably a better winemaker than motorist. But we survived the excursion into Pope Valley and even located the sunshine that had more or less gone missing since April in this year of odd weather. It was turning into a nice summer day, and the views were impressive in all directions. Just as a pleasant, pastoral feeling was beginning to wash over me, Dan introduced a bit of schizophrenia into the conversation. “I have a love-hate relationship with Juliana,” he said. I looked instinctively over my shoulder at Sophie, who lay quietly in back, then remembered that Juliana was not a pet or a crazy ex-girlfriend but the name of the vineyard we were about to visit. He had dropped the name only once or twice before. Until the car ride, I in fact knew very little about the Massican sauvignon beyond that it tasted quite good and Dan had made barely enough in ’09 to fill a Jacuzzi. His irony surprised me, but I would soon find out what he meant. 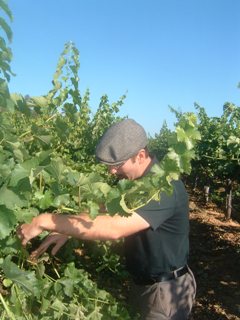 A few minutes later we stepped out of his car and into Juliana Vineyard. We were “in” the vineyard, but actually at one edge of it, near the base of a tree-lined hill. This was the Massican block. While Sophie trotted off to chase rabbits, Dan began to inspect the outermost row, which veered a hundred yards or so away from us. Along with the adjacent two, it was thick with overhanging shoots of vines. “The thing I like most about vine vigor,” he observed, smiling, “is that the vines look happy.” In this case, Dan’s was an ecstatic little section of the vineyard. He rooted among the shoots, pulling off handfuls of leaves. As he did so, he opened the irony door again. “This block that I’m sourcing is gorgeous in its ugliness,” he said, then added, proudly, “but it gives small, tight, fist-sized clusters of grapes.” I could see that by “ugly” he meant exploding with foliage: the jungle-like canopy of leaves reached skyward and nearly touched the ground. “Two weeks ago you couldn’t even walk between the rows, they were so overgrown.” The leaf canopies had since been trimmed back to allow passage between the rows, though not much more than that. Next to his three verdant rows, the rest of the property appeared well-manicured (the section that I could see, anyway—Juliana Vineyard covers a sprawling 2000 acres, with 400 of them planted to sauvignon blanc). The differences in grooming were pronounced. Pretend for a moment that Haight Street was located on the campus of West Point and you’ll understand the relative unruliness—the “ugliness”—of Dan’s block. And yet, hidden beneath the canopy, bunches of pale green sauvignon grapes hung from the shoots. They were, ironically, compact and healthy-looking.

After walking the rows with Dan for fifteen minutes, I discovered that their wild, unkempt appearance went to the heart of what made this a special section of Juliana Vineyard. “My block,” he explained, “is not a priority block. That’s why I like it.” He mentioned it had something to do with tons of grapes yielded per acre, though in the same train of thought he recalled the time Sophie bit a vineyard worker who had stepped on her tail. This more dramatic piece of information was what ended up in my notebook. 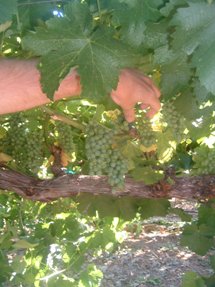 Helpfully, he clarified in a follow-up email that his vines, for a variety of reasons including soil type, row direction, and microclimate, yielded an unusually small amount of fruit at harvest: about three tons an acre (or the equivalent, since they cover less than an acre). This limited yield—and decreased profitability, compared to the rest of the vineyard—effected what he described as a “low commitment of resources” when it came to the vines’ maintenance. If there was a possibility that his section was a noticeable green splotch on Google Maps, it boiled down to economics. “The bottom line,” he wrote, “is that it’s a low-yielding portion of the vineyard, and sauvignon blanc doesn’t command a high price tag to justify precision viticulture.” But conventional wine wisdom also says that lower yielding vines tend to provide a better balance of concentration and elegance in a finished wine. Among its other qualities, the ’09 Massican is all about this balance. I found Dan’s own description useful. “It’s not the richest, it’s not the ripest, it’s not the most over-the-top sauvignon blanc when you think of intensity in Napa Valley, but I think it’s the most atypical.” As a skilled and conscientious winemaker, he has allowed his sauvignon blanc to demonstrate the vines’ potential, however improbable. His little slice of Juliana Vineyard is an extraordinary piece of real estate. 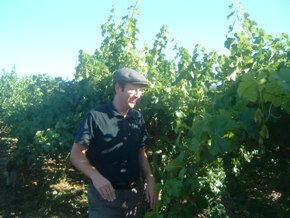 As we pulled out of the vineyard, a pair of quail scurried past the car, and the conversation on the ride back turned to food. California’s state bird is a popular item in many Napa Valley restaurants and butcher’s display cases. With its bright flavors and lively acidity, Massican sauvignon is a wine one might sip in the backyard while grilling small birds. Dan agreed with me that, as a foil to certain foods, it tasted great with goat cheese. “The wine’s a swing style that can stand up to fish and white meat, but for me any salad with goat cheese in it is a nice preparation.” Of the two bottles I was able to get my hands on (he wouldn’t let me pay; I had to trade with him for a couple bottles from my own stash), Rachael and I enjoyed one of them at home in August with grilled asparagus and a very good Loire Valley goat cheese. I needed to save the other bottle to share with a restaurateur friend in Hollywood whose palate I greatly admire (and whose impressions helped form the second part of this article). Such extremely limited access reminded me that, in the ongoing black comedy that is wine sales and distribution, Dan has struck upon a business model which may not hasten his path to retirement but nonetheless allows him to say the three magic words when describing his production: “Sorry, sold out.”