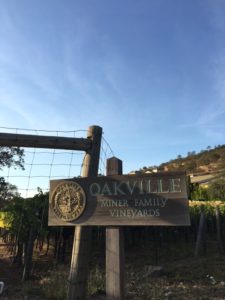 ON A HILLSIDE ABOVE OAKVILLE, Dave Miner and company sit in cabernet’s catbird seat.

It’s carved into a rocky slope that faces west down to the Silverado Trail, where the Napa Valley floor displays hardly a patch of green canopy that isn’t planted to the traditional varieties of Bordeaux. The neatly divided blocks of Oakville are verdant with cabernet sauvignon, merlot, and cabernet franc, the vines that tie Napa Valley and California to France’s most famous wine region.

Miner Family Winery is perched in the Oakville AVA with a view across a section of the valley that a friend of mine, the wine merchant Rhett Gadke, once called “the Rodeo Drive of Napa Valley.” The analogy fits, since so many of the cabernet-based wines produced here command Beverly Hills prices. Although Dave Miner’s Oakville cabernet sauvignon isn’t exactly cheap, compared to most of his neighbors’ price tags, it’s more Silver Lake bottle shop than Beverly Hills boutique.

On the shelves of said boutiques, or at winery cellar doors, many Oakville cabernets and red blends cost as much as the top wines from Left and Right Bank Bordeaux. Dave Miner doesn’t shy away from the comparison—just the $200-per-bottle prices.