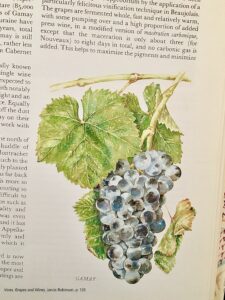 With his mistargeted and absurdly disproportionate tariff to punish Airbus, the teetotaling “genius” in the White House, who wouldn’t know a Brouilly if one bit him on the ass, had been conniving a criminal fucking-over of European producers and the legions of U.S. workers who depend on their wines to make a living. Then the pétulant-en-chef and his people did a predictable about-face, which delayed, at least until August, the USTR’s next required review of the tariffs. On Valentine’s Day, all was right in the world once more. 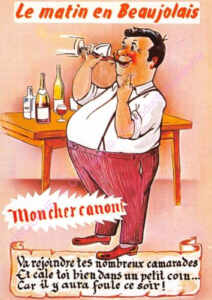 Now, in the midst of a global pandemic, my depleted stash of juicy, ready-to-open wine is clearly of little importance to anyone not living in my house. We all have bigger fish to fry these days—and I have bigger wines hidden away. I just really like gamay.

In the weird times we’ve been living in since the November ’16 election disaster, I’ve found that keeping a few bottles of good Beaujolais around to geek out over before the next lunch or dinner is comforting, in a fend-against-existential-dread sort of way. Coming as close as many U.S. importers did to a trumpist extinction event, it makes their talented Beaujolais producers’ wines seem as precious as fancier bottles from their neighbors in Burgundy.

With gamay, those vignerons turn out perhaps the best French “comfort reds”—if I can use that term without embarrassing myself. More than 45,000 acres of it are found in Beaujolais, where the majority of France’s gamay is planted and made into some really cheerful wines, from the annual harvest hard-pop, Beaujolais nouveau, to the more serious villages level bottlings, to the ten fantastic cru Beaujolais. This last group—cellar-worthy and still affordable—are so delicious they can actually cause sommeliers to abandon their senses and down-sell their customers, instead of counseling them in the normal, opposite direction. 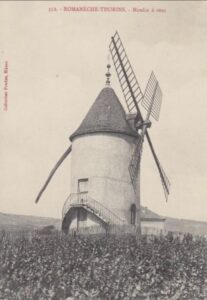 he crus are a bit tricky to pronounce (Regnié and Chiroubles), while others wear pretty names (Saint Amour and Fleurie). All ten are appellation contrôlée wines, with nine named for a group of villages clustered at the upper end of the Beaujolais region in east-central France, about 30 miles northwest of Lyon. There’s nothing particularly quixotic about the tenth cru, Moulin-à-Vent, though it does take its appellation from a 15th century windmill.

“No French wine region shows such devotion to a single grape variety as Beaujolais,” Jancis Robinson wrote about gamay in her first edition of Vines, Grapes and Wines. (This was way back in my high school graduation year of 1986, when I was still three years away from my first glass of the stuff.) Robinson noted at the time that “more than 98 percent of vines planted are gamay…grown to produce France’s most popular red wine.”

While the acreage of gamay has increased in other parts of France over the last three-plus decades, Beaujolais still accounts for nearly 70% of its total. But the vine shows up—and thrives—in the nearby Coteaux du Lyonnais, just outside Lyon, and a few hours’ drive west of Beaujolais in one of the essential French winegrowing regions, the Loire Valley.

Gamay productions from the Loire appellations of Anjou and Touraine are relatively tiny when compared to those of the grape’s home turf, but the better examples can resemble good Beaujolais: the kind of “light, fruity, early drinking reds,” as the minds behind the website Wine Folly describe the Anjou Gamay appellation, that one might order with lunch at a Paris bistro, or reach for to wash down a shelter-in-place ham sandwich.

And, “in the lower Loire Valley,” Robinson notes on her website, “Gamay’s stronghold is Touraine where it is responsible for lively, sometimes aggressively tart, wines.”

Light-bodied, fruit-forward Touraine gamay could hardly contrast more with the dense, tannic red wines from the popular Touraine appellations of Chinon and Bourgueil, known around France and internationally for excellent cabernet franc.

Closer to home in north Napa, a stone’s throw from the merlot and cabernet vines of the Oak Knoll AVA, you’ll find both aggression and tartness in our house when the gamay well runs dry.

Having since forgotten specific labels and producers’ names, I still know I tasted, bought, 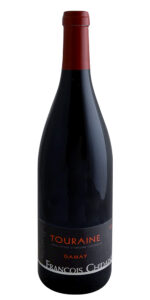 and served a few Loire Valley gamays during my restaurant days in the late 90s and early 2000s. What I recall about these very decent but affordable wines squares with my more recent impression that their similarities to Beaujolais—juicy drinkability and great value—are unmistakable.

Near the city of Tours and across the Loire River from the famous chenin blanc vineyards of Vouvray, the Chidaine estate in Montlouis produces one of my favorite chenin wines, Montlouis Clos Habert. As it turns out, François Chidaine and his wife, Manuela, have a side hustle making Touraine Gamay. I would dearly love to get my hands on this wine, which the couple debuted in the 2018 vintage. My friends at their west coast importers, Beaune Imports in Berkeley, don’t include it in their catalogue—yet hope springs eternal in this human’s breast that the situation will change. Otherwise, I’m calling UPS.

The Chidaines’ New York importer, Polaner Selections, does bring their gamay over from France. Tariffs aside, at least the wine gets to our shores. To draw a Beaujolais comparison, Polaner calls this Touraine red a “great wine for Bojo drinkers interested in an everyday sipper” on its website. Summing up the challenge faced by “Bojo drinkers” everywhere, they add, “and the bottle is empty before you know it!”

I can relate. Several weeks ago, at the starting point of shelter-in-place, I’d cleaned us out of Beaujolais and anything resembling it. So, pandemic be damned, I headed down to Berkeley on an impossibly traffic-free I-80 to pick up some more Traboules—my new favorite gamay and an unusual wine for bizarre times. 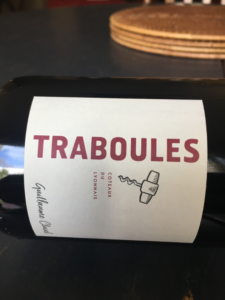 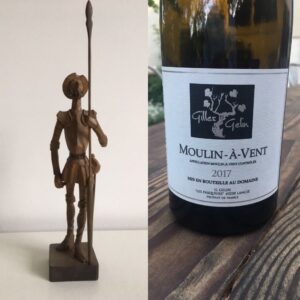