“If I had a thousand sons, the first humane principle I would teach them should be to forswear thin potations and to addict themselves to sack.” – Falstaff, Henry IV 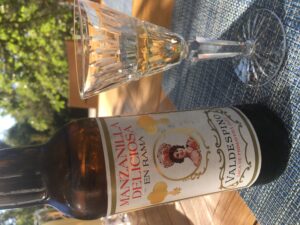 AS PASSIONS, TRAVEL AND WINE PROVIDE unique opportunities to open one’s mind and, perhaps in the best of circumstances, impart a sense of place that allows a deeper view into the interplay between people and environment. Tradition and authenticity take on new meanings in an ever-shrinking world while seeming to grow only more valuable in their rarity. With this in mind, and with a desire to be transported mentally at a time when physical travel is all but impossible, I opened a bottle of Manzanilla Deliciosa from Valdespino.

Manzanilla is a sherry that comes from Sanlucar de Barrameda. Since 1964, the area surrounding this coastal Andalucian town has had its own DOP (Denominación de Origen Protegida), but it is generally included under the DO of Jerez-Xérès-Sherry y Manzanilla de Sanlucar—a mouthful even to Spaniards! 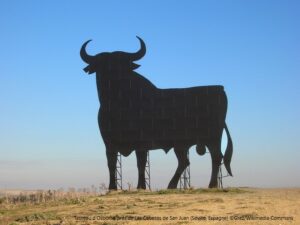 Located where the Guadalquivir River flows into the Gulf of Cádiz, on the Atlantic Ocean, Sanlucar is the northernmost of the “golden triangle” of Sherry towns, with El Puerto de Santa Maria to the south and, inland, sherry’s namesake and most famous town, Jerez de la Frontera. The area has a history of wine production that dates back to the Phoenicians, who founded Cádiz over 3,000 years ago.

Deliciosa is made at the Bodega La Guita, part of the Grupo Estévez which also owns Valdespino and Rainera Pérez Marin (the original producer of Deliciosa) and now markets them under the Valdespino name. La Guita means “the string” in Spanish and refers to the twine traditionally sewn through the cork of a sherry bottle to avoid losing it—a sort of cork leash. All sherry is aged using a solera system, a process originating in the area that allows the wine to take on essential characteristics without losing its youth. Deliciosa is aged an average of six years; my bottle, or rather half-bottle, was an “En Rama”—a minimal filtering which was a “Saca de Primavera 2017.” The notation on the label indicates the wine was drawn from the solera in spring of 2017. This was no “young” wine, though, as it had spent approximately six years aging in American oak barrels in the bodega’s solera system.* 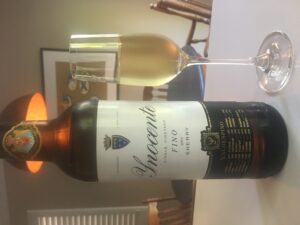 Sherry, like Port, is a fortified wine, receiving a dose of wine spirit to raise its final alcohol content. In Sherry, the neutral grape spirit is added after fermentation is complete, leaving it a dry wine (Port, on the other hand, is fortified during fermentation, which stops the remaining sugars from turning into alcohol and leaves the wine sweet). This fortification, which lifts the alcohol in Manzanilla to about 15 percent, helps stabilize and preserve the wine and, more importantly, allows for a special aging development. Manzanilla, like its Jerez counterpart wine, Fino, develops in cask under a velo de flor, or “veil of flor,” which thrives in the cooler but more humid coastal atmosphere of Sanlucar. The flor feed off alcohol but are natural yeasts that differ from the yeasts during fermentation. They create a layer on the surface of the wine, protecting it from air and oxidation and continuing to add to the flavor characteristics over time.

My bottle of Deliciosa had such flor notes on the nose: a crisp, dry, and slightly grassy taste, along with some nuttiness and a hint of lemon curd on the long finish. It is customary, in both Spain and at my house, to drink Manzanilla in the sun. As I did so, glasses went down in quick succession. The wine took me back to visits to Spain, where I’ve enjoyed it as an aperitif while sitting in a seaside café, and alongside some fried fish in a Madrid seafood house. I also liked drinking it at the aged wooden bar at La Venencia, an old-school locale 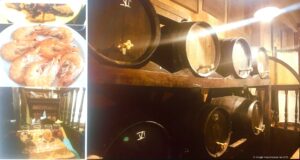 off the Plaza Santa Ana where almonds and mojama, or cured tuna, are the sides of choice. Other than the sherry drawn straight from giant casks, tap water is the only beverage on offer (no joke!)

Sherry’s impact on the wine industry and, in fact, on the world at large is vast and storied; its relationship with the United Kingdom is perhaps the most famous. Sherry’s reputation grew rapidly after Sir Francis Drake sacked Cádiz in 1587 and made off with over 2,000 casks of the stuff. Shakespeare conjured celebrations of it through multiple mentions in his works—and no doubt enjoyed it himself. The thrifty Scots procured empty sherry casks, which by Spanish law were required to be made of oak to protect the wine quality. They used these barrels to age Scotch, finding that it added to the quality of their own whisky. Sherry was an early and favored export to the New World, as the fortified wine not only survived spoilage during the voyage but often improved with travel due to the changes in temperature and constant rocking of whichever boat was transporting it. “Changes in latitudes, changes in attitudes,” as Jimmy Buffett once wrote.

Take your pick, Fino or Manzanilla. Select a spot in the sun and grab a dish of salted almonds. Then, enjoy Sherry’s simple pleasure and transport yourself back in time to a classic Spanish wine as you contemplate the explorers, bards, settlers, and dreamers that, like you, all drank of the sack.

*Editor’s note: The solera criadera system of tiered barrels, as it is known in Jerez, is complicated; for a clear explanation, visit the excellent Sherry website page https://www.sherry.wine/sherry-wine/production/ageing 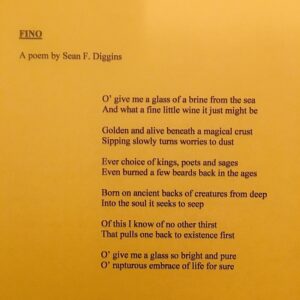